The Annual Meeting of Beyond AIDS, and an open Board meeting of the Beyond AIDS Foundation, were held on Sunday, November 13. The central meeting place was in Redlands, California, supplemented by conference call participants from across the country.

Two of the topics discussed at the Annual Meeting, legislative activities in California this year, and reports from the International AIDS Conference in Durban, South Africa, have already been reported in separate articles.

A special feature at the meeting was a report from Richel Strydom, the current Treasurer, about her recent work in the small African country of Lesotho (pronounced "lesutu"), which is entirely surrounded by South Africa.


Dr. Strydom, a native of South Africa, is also a Loma Linda Preventive Medicine resident. She did a residency rotation at the Maluti Adventist hospital in July 2016. She expressed appreciation to Loma Linda University and to the hospital for the opportunity. The HIV prevalence rate for ages 15-49 in Lesotho is estimated at 23.4%, second highest in the world, with higher rates in females under age 40. Partly as a result, there is a high rate of cervical cancer.

The Health Ministry adopted a “test and treat strategy” to take effect the month she was there, and she attended the introductory training. HIV meds will be offered immediately after a positive test result. This strategy, already implemented in the U.S., was endorsed by UN AIDS in 2015, but Lesotho is the first country in sub-Saharan Africa to implement such guidelines. Assistance has been assured from the Elisabeth Glaser Pediatric AIDS Foundation, and from the U.S. government President's Emergency Plan for AIDS Relief (PEPFAR) fund.

Richel discussed a plan for cervical cancer testing – every 5 years for sexually active women. However, Pap testing and high risk HPV screening are not yet routinely available there. She gave presentations at the hospital and at the school of nursing, on the importance on cervical cancer screenings, using a more primitive technique, visual inspection during a pelvic examination with acetic acid application to the cervix to identify abnormal tissue. Women with positive findings currently need to be referred by the hospital elsewhere for biopsy and treatment. She also assisted in HIV and TB care, prevention, and community education. 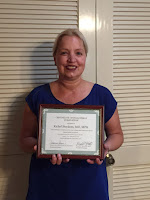 At the Foundation Board meeting (which followed the Annual Meeting), Dr. Strydom was presented with a certificate for having recently completed a 2-year part-time fellowship with the Beyond AIDS Foundation. Her research study, a survey of state and regional AIDS Directors, is still ongoing.

Also still pending completion is an earlier survey of local jurisdictions in California concerning their practices for HIV partner services.

The Foundation recognized Michael Weinstein, President and founder of the AIDS Healthcare Foundation, for its annual Nettie Award, citing his courageous and innovative advocacy for HIV prevention and treatment. The award is to be presented in Los Angeles in December.

Cesar Reis was accepted as a new fellow, and Camila Araujo as a new intern. Their first duties will involve helping to complete research studies. They have also expressed interest in helping to organize an educational webinar under guidance from Beyond AIDS Vice-President Jeffrey Klausner. Further information and the application form for the Beyond AIDS Foundation's internship and fellowship program is available on the Beyond AIDS web site.

Ronald P. Hattis, MD, MPH
This blog intends to be thought-provoking and to challenge some current dogmas.